The first week of the General Chapter was dedicated to the election process, including discussion of the current reality of the congregation. Now, chapter delegates direct their attention to the future. How should Dehonians respond to the world today? What priorities should guide the general administration during its six-year term?

Over the next several days the chapter will hear reports on the topics of Vocations and Formation, Evangelization, Spirituality and Identity, Missions, and the Structure of the Congregation. Following each report, delegates are to meet in small groups to process what they hear.

Fr. Léopold Mfouakouet, SCJ, spoke about Vocations and Formation. The last General Chapter encouraged promotion of internationality at all levels of formation. Some entities have worked together to create international scholasticates. Others have welcomed international students to established programs. At the general level, nine-month educational programs have been offered for formators and for those preparing to serve as treasurers.

Common themes were heard in the reports from the small groups. Formation is vital, especially initial formation; most delegates thought that initial formation should be done in a student’s home entity. Many called for greater development of formators at all levels. 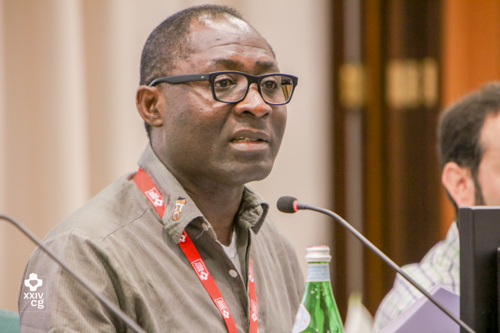 “We train people at the highest level for scripture and canon law, expecting them to get a license or a doctorate,” said one delegate. “Yet we only offer a nine-month course for formators; that’s not enough.” Several suggested that formators have at least two years of training which would include “accompaniment,” meaning that a formator would be accompanied in his training just as he would be expected to accompany a student in formation.

Internationality continues to be a priority in formation, including the desire for SCJs to be multilingual. Yet several questioned the practicality of Italian as the primary language for educational programs, even when they are taught in Rome. Many entities, especially in Asia, use English as a common language. Would it be possible to have extended courses for formators and treasurers in English? 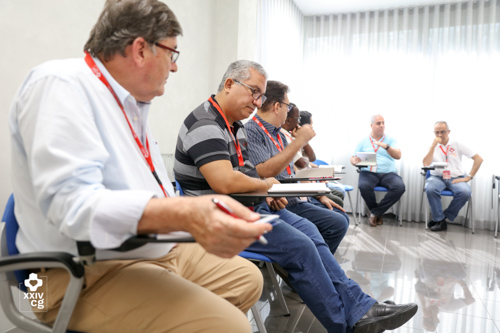 Formation is vital, but…

As vital as formation is, there is no need for it if there are no vocations. “Vocational development must be our priority,” said a delegate reporting for his group. Suggestions included linking vocations to youth ministry, creating more Dehonian youth gatherings, having an SCJ presence in colleges and universities, and better utilizing social media. “We have a great ‘brand’ but we have to find professional ways to promote it,” said another delegate.

Some suggested that a secretariat for vocations be established at the general level to animate vocation ministry throughout the congregation. Many emphasized the need for all Dehonians to accept responsibility for vocations. Vocation development cannot be a job simply assigned to a few.

Fr. Stephen Huffstetter, SCJ, spoke about “Evangelization,” a sector that includes education, justice and peace, and parish ministry. He asked delegates to discuss several topics in small group, including the General Conference that was to have taken place in Manila this year. Should the conference, that was to focus on the social dimension of the Dehonian charism, be rescheduled? 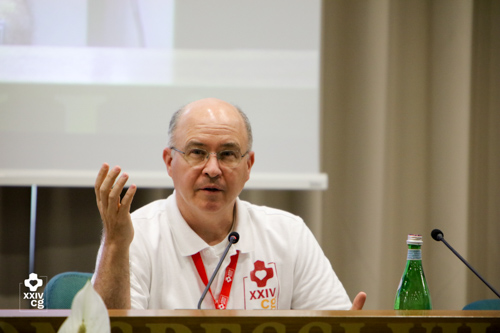 Beyond a possible conference, how can the congregation better address Justice and Peace concerns? Fr. Steve noted that most religious congregations the size of the Dehonians have a full-time Justice and Peace director. Should the SCJs consider establishing such a position? If so, would that person need to be based in Rome, or could the person animate social justice issues from his home entity?

Fr. Steve also spoke about education and parish ministry. A seven-member education group was established on the general level. “These educators want to do more than create networks for information exchange, they want to get to the heart of our pedagogy,” said Fr. Steve. What are the commonalities of education under the umbrella of the Dehonian charism? Similarly, what makes a parish Dehonian?

Once again, the delegates met in small group. Regarding the social dimension of the Dehonian charism, several said that there needs to be some type of organizational structure, either on the general level or from the continental level. Many felt that the general conference should be rescheduled, or that its theme be addressed in another format.

There was wide support for the work of the education commission but mixed feelings about holding another international education conference. The 2014 conference in Valencia suggested several initiatives, including the development of an educational network. Some felt that these are tasks that should be pursued before another conference is set.

A Mass of Thanksgiving

On Sunday, June 22, chapter delegates took a break from the meeting hall to celebrate a Mass of Thanksgiving at St. John Lateran Basilica. Fr. Leo John Dehon was ordained at the basilica in 1868. The superior general was the main celebrant. He was joined at the altar by members of the newly elected General Council, including Fr. Levi Dos Anjos Ferreira, SCJ, who arrived in Rome just in time to join Dehonians at the Mass.

The Mass was broadcast live on TeleDehon. Click here to view the video. 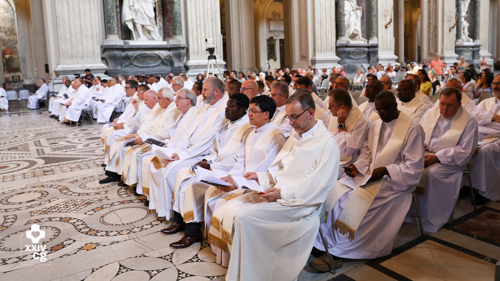 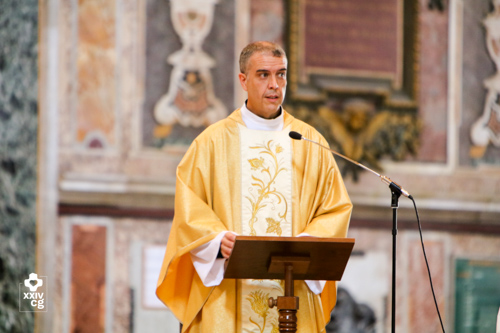 This site uses technical, analytical and third-party profiling cookies to operate and collects traffic information. To consent to the use of cookies, press [ACCEPT], otherwise [DECLINE]. For more information READ HERE.
Accept  Decline
Read the Privacy Policy and write to
Accept  Decline