Yesterday, Fr. Paulus Sugino, SCJ, said that the missionary call is a vital part of the Dehonian identity. However, it is a call that requires resources. How can the congregation best respond to its financial needs throughout the world?

On Wednesday morning, Fr. Luca Zottoli, SCJ, general treasurer, introduced a set of directives for international aid within the congregation.

“Generosity and mutual help are a visible form of our Sint Unum,” states the document in its first lines. A General Aid Fund was established by the 1985 General Chapter. Since then, several adjustments have been made to the statutes of the fund. The 2009 General Chapter approved the 1% proposal, requiring that each entity give 1% of its “available finances” to the General Aid Fund.

The “Directives of Intra-Congregation Aid” was developed by the General Treasurer’s office to systematize the support and use of the General Aid Fund and to develop criteria for the distribution of money.

Transparency and good communication are vital to the sharing of funds. Some entities send money through the General Treasurer’s Office. Others prefer one-on-one partnerships where funds are given directly from one entity to another. This second approach is acceptable, said Fr. Luca, as long as the General Treasurer’s Office is always kept informed.

Good communication ensures that the needs of all entities are met as equitably as possible.

Delegates discussed the Directives of Inter-congregational Aid. Most were in favor of it, but clarification is needed. There were questions about the concept of “1% of available finances.” What does that refer to? Available cash? One percent of the value of all resources in an entity, including real estate?

Also within the document is a proposal for the establishment of a general fundraising office directed by an SCJ in collaboration with a development specialist. Oversight would fall under the General Treasurer’s Office.

The document will be further reviewed on Thursday.

Fr. Radek Warenda, SCJ, General Communications Director, spoke about the work by of the newly developed Communications Office. He emphasized that the office is in service to the General Curia. For example, the prior General Government developed the new “Open Heart and Mind” Mission Statement. The Communications Office then had the task of making the statement known. Seen on tee shirts, cups, notepads, banners, websites and other items, the new “Open and Heart and Mind” logo is now present throughout the congregation. 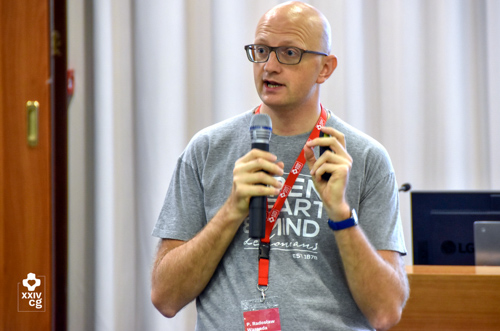 The Mission Statement logo illustrates how a simple image can quickly bring to mind the organization that it represents. But a logo is just one piece of an organization’s Visual Identity.

Visual Identity includes everything from logos to typefaces to colors to slogans. In a split-second, they convey an organization’s identity. Fr. Radek presented the Communication Office’s first steps in creating a possible Visual Identity for the congregation. Other significant projects of the office include a new website for the congregation, including a more user-friendly members section.

Delegates said that they appreciated the work of the Communications Office. Many were in favor of continued efforts in creating a Visual Identity, but several noted the challenge of using “Dehonians” as the common name of the congregation in entities where the community is known differently.

“It is important that there is a sense of unity in the congregation without requiring uniformity,” said a delegate.

In the afternoon the chapter heard from Fr. José Zeferino Policarpo, SCJ, who spoke about the extended formators’ course that will begin in October. It concludes with a pilgrimage to the Holy Land next summer; the trip is open to SCJs outside of the formation course. Fr. Bruno Pilati, SCJ, superior of Rome II, talked about the community’s challenges, but also how it serves as an excellent experience of international community living. 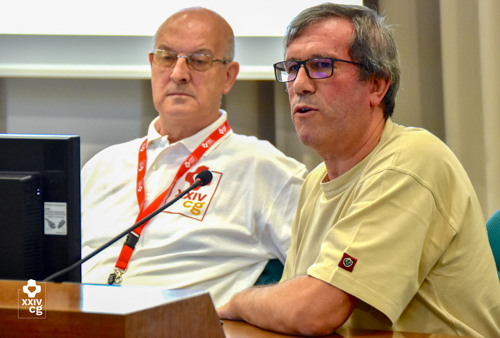 Fr. Carlos Enrique Caamaño Martín, SCJ, spoke about the need to review the organizational structures of the congregation. Should some smaller entities be combined? How can young, growing districts be better accompanied as they develop? On the other end of the spectrum, how should the congregation accompany its senior members, its aging entities?

In the last session of the day delegates reviewed a draft of the final message. This will be finalized on Friday, the last day of the General Chapter.