The day opened with Mass celebrated by Fr. Heiner Wilmer, former superior general. It would be his last Mass with the Rome community before leaving to prepare for his new assignment as bishop of Hildesheim, Germany. Fr. Carlos Enrique Caamaño Martín, the current superior, thanked Fr. Heiner for his service. He said that Fr. Heiner had not only been a good leader, but an excellent confrere, a brother in life and in work. It was an emotional moment of both joy and sorrow as Fr. Heiner gave thanks for the congregation and to those with whom he served. After the Mass, each capitular lined up to personally expresses his well-wishes to the bishop-elect. 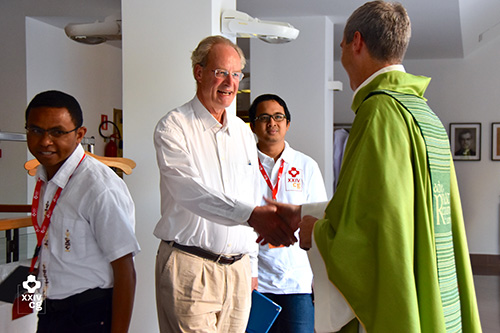 The State of the Congregation

Before the chapter delegates discern new leadership, it is important to hear from the current administration about the “state” of the congregation. What are the priorities? What are the challenges?

The State of the Congregation isn’t simply a summary of projects and numbers, a statement of where Dehonians are and what they are doing. It is a window into the life of the congregation as described by those who have the widest view: the Superior General and his council. 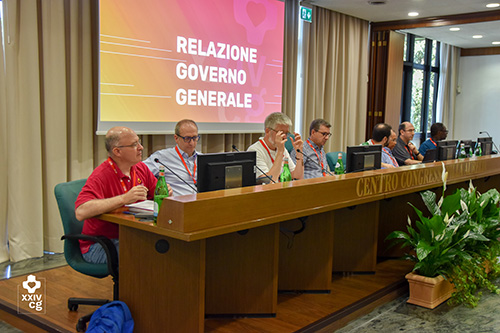 Fr. Carlos Enrique Caamaño Martín began by reminding the delegates that it is a report of an administration that only reached the midway point of its term. Some projects are just beginning, others have not yet started. Only one continent has had a full canonical visitation (Africa), though the superior general was able to visit many entities during his nearly three-year term.

Priorities and areas of focus

Soon after Fr. Heiner Wilmer took office, he and his council developed a programmatic letter strongly based in the message of the XXIII General Chapter. The letter identified three areas of focus: marks of mercy in formation, marks of mercy connected with the poor, and marks of mercy in evangelization.

Working together, the administration developed a new Mission Statement for the congregation, identifying a vision (Love with open heart and mind) and a mission (Adveniat Regnum Tuum –– Your kingdom come).

The last General Chapter recognized the importance of communication not only as a means of sharing who the Priests of the Sacred Heart are with others, but as a way of building Sint Unum and sharing the Dehonian charism. In response to this, a General Communications Office was created, along with an advisory commission. Already the office has been busy working with communication professionals throughout the congregation, as well as promoting the new Open Heart and Mind Mission Statement and taking the first steps in developing a visual identity for the Priests of the Sacred Heart.

Formation has also been a priority of the administration. In October, the extended course for formators begins. It concludes with a trip to the Holy Land in spring. A formation course for treasurers took place during the 2017-18 academic year.

Opening its doors to the pressing issues of today, the Generalate worked with other religious communities to offer hospitality to immigrants. An immigrant from Afghanistan and one from Bangladesh spent time at the house while they transitioned to their new country.

Of projects begun but not completed, Fr. Carlos Enrique cited the General Conference in the Philippines that was planned for the same time period as the General Chapter. He hoped that the next administration would revisit the conference. 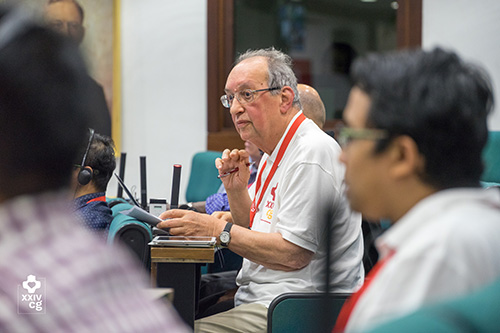 Fr. Carlos Enrique also spoke of the administration’s emphasis on the missions and the need for a missionary spirit. “We recall the missionary boldness of Fr. Dehon,” said the superior general. Possibilities for new missionary entities in places such as Colombia, Mexico, Kenya and Nigeria were explored. At the same time, the administration sought ways to build a sense of internationality and mission within formation programs throughout the world.

Looking at the statistics of the congregation, Fr. Carlos Enrique noted the continuing shift of the congregation’s center. While the number of Dehonians shrinks in Europe, North America and South America, it is steady in Africa and grows in Asia. The congregation must be present to its aging members while continuing to focus on the development and support of the younger generations who are its future.

He spoke of some of the individual challenges of each continental area but emphasized the need among all to share in resources, especially personnel. The superior general suggested that new structures be created to help facilitate such sharing.

Following Fr. Carlos Enrique’s presentation, each councilor spoke about his particular sectors of responsibility, expanding in greater detail many of the topics identified by the superior general.

In the afternoon, delegates met in small groups to discuss the State of the Congregation. 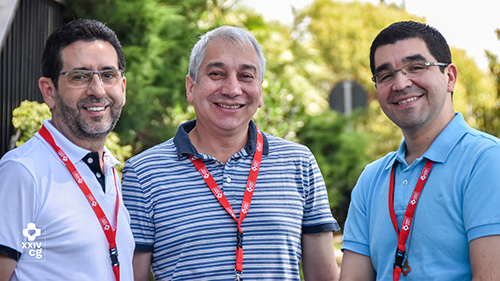 Building community around the World Cup

Following a motion brought forth and approved earlier in the day, the chapter concluded its activities a bit earlier than planned to allow delegates to build community around the television and watch the final game of the World Cup. Several suggested that Dehonians should cheer for France, the homeland of the congregation’s founder.