What does it mean to be a Dehonian? The congregation has many diverse ministries around the world, but so do other religious communities. What is it that makes a Dehonian ministry distinct from that of a Jesuit, Benedictine, Dominican, or diocesan ministry? How are the social works of the community any different than the social efforts of secular organizations which also seek to be in solidarity with the poor and disenfranchised?

Understanding the Dehonian charism – Dehonian spirituality – is the first step in answering the question, “What does it mean to be a Dehonian?” 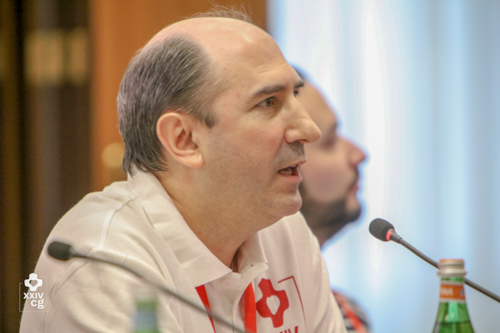 During the previous administration, Fr. Artur Sanecki, SCJ, had responsibility for the sector of Spirituality. Opening the chapter’s discussion on the topic of “Spirituality and Identity,” Fr. Artur identified some of the work that has taken place during the past three years under the umbrella of “Spirituality,” including the establishment of Dehonian Theological Commissions on each continent, and the International Theological Symposium held last year in Yogyakarta, Indonesia.

“But are we doing enough to develop our understanding of who we are as Dehonians?” he said.

A significant resource is the Dehon Study Center (Centro Studi Dehoniani). Fr. Stefan Tertünte, SCJ, director of the center, spoke about some of the CSD’s activities. One of the most significant works of the office is the development of “DehonDocs,” a searchable on-line directory of the writings of Fr. Leo John Dehon, as well as related research and commentaries.

The center also offers a scholarship program. Currently two SCJs –– one from India and one from Brazil –– are beginning their fourth of a five-year study project. At the end of the program the two students will have an extensive knowledge of the founder and his writings. But then what? “How do we profit from their competence?” asked Fr. Stefan. 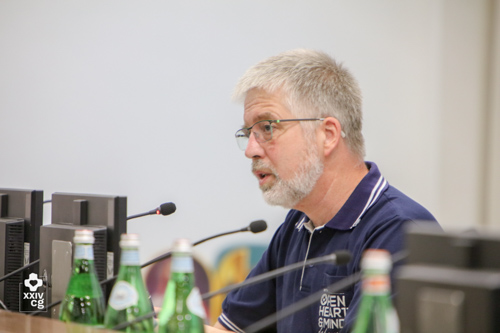 The Dehonian charism is a gift, a treasure to be valued. It is a legacy for the congregation. How can it be nurtured and shared not just with the wider public, but with Dehonians themselves?

In small group discussions chapter delegates affirmed the work of the Centro Studi Dehoniani, stating that it is a vital resource to the congregation. While noting that professional, academic study of Dehonian spirituality is important, several said that it is equally important to create ways of sharing the charism in terminology that is more readily understood by a wider audience. One group suggested that a dictionary be developed to define terms unique to the congregation. “It is not just those to whom we minister who would benefit from such a guide, but our own members as well,” said a delegate. 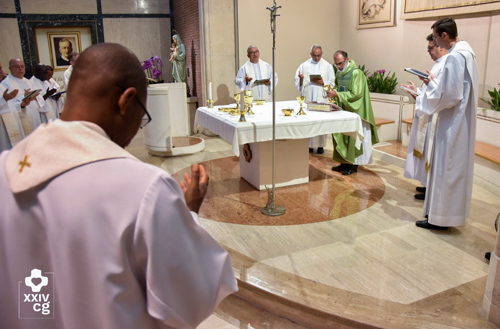 There were also comments about the Rule of Life; some translations have errors. Would a review of the Rule offer an opportunity not only to correct the text, but to find ways of more fully integrating it into the daily lives of SCJs? How can Dehonians really live the Rule of Life if they aren’t familiar with it, if they don’t regularly read it?

Several entities and geo-cultural areas have held Dehonian retreats. This is also an excellent way for members to become more familiar with the charism and to reflect upon it.

To have a missionary spirit

What does it mean to be a Dehonian? Fr. Paulus Sugino, SCJ, reminded delegates that it also includes a call to the missions.

“As an international Congregation we hear the call to the universal mission of the Church and we wish to participate in it at the individual and the community level,” said Fr. Sugino, citing SCJ Constitutions, No. 33. “Missions beyond our borders constitute for each one a basic dimension of our consecration.” 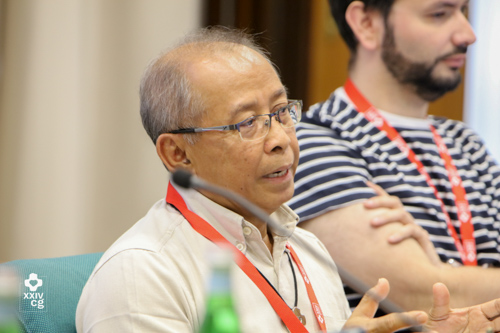 Fr. Sugino continued, noting that a call to the missions has been with the congregation since its earliest years. To have an “Open Heart and Open Mind” is a missionary call.

However, it is a call that requires resources, both financial and personnel. How can the congregation adequately support the missions? Is there still an openness to new efforts? Several entities have developed missionary volunteer programs; how can these programs best serve the missions while at the same time provide an important formative experience for those who take part in them? How can missionary volunteers be accompanied not only during the mission, but after? 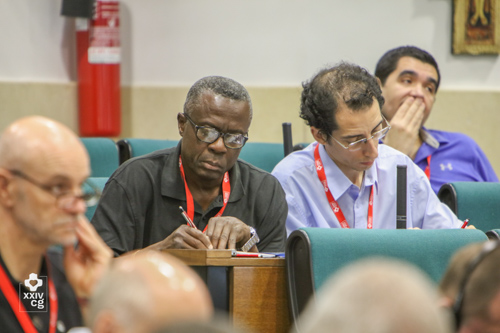 In small groups delegates reflected on these questions. There was strong agreement that commitment to the missions is at the heart of what it means to be a Dehonian. But as Fr. Sugino noted, missions need resources. Priority must be placed on strengthening the new missions that have already started. Strategic planning is vital so that a mission has appropriate resources of personnel and finances for years ahead.

Many groups also endorsed the idea of a Dehonian Mission Day, a day to be celebrated not just with SCJs, but with the wider Dehonian family and those with whom it ministers.

Extensive study of the founder by non-Dehonian

The apostolate through publications

The apostolate through publications

Extensive study of the founder by non-Dehonian